Mark Clattenburg is our January Referee of the Month

This was one of the hardest months for us to make a decision on thus far, as there was no Champions League or Continental Tournament to help distinguish referees from the pack. However, in our eyes Mark Clattenburg had a good month which included being named to Euro 2016. In fact, he seems to be considered one of the best referees in Europe right now, as well as a top 2 referee in England.
Posted by Unknown at 7:46 PM No comments:

What do you want to see from this blog?

With this blog approaching 9 months of existence, I wanted to hear from you what you want to see us do more of: performances analysis, appointments, or refereeing news. Drop a comment with what you want to see!
Posted by Unknown at 6:32 PM 3 comments:

Congratulations to Felix Brych of Germany, who was named our 2015 Referee of the Year. Although Brych didn't referee a major final, he was in our opinion the most dependable referee for UEFA Champions League, Europa League, and EURO 2016 Qualifying. Brych was someone who stayed out of the headlines as a referee, which is often a good thing because it indicates a lack of huge errors. Do you agree or disagree? Tell us in the comments!

Posted by Unknown at 8:06 PM No comments:

Alireza Faghani is our December Referee of the Month

Alireza Faghani was voted by our writers as the Referee of the Month for December after a strong performance at the Club World Cup which saw him referee both the 5th place match and the Final. He was strong in both matches, giving him a strong finale to a stellar year in which he refereed the AFC Asian Cup final in January. Overall, a well deserved award for Faghani.
Posted by Unknown at 8:24 PM 1 comment:

Busy Festive Period for BPL Referees: We have updates on every big decision

Boxing Day (December 26)
-Andre Marriner was busy in Chelsea-Watford, correctly awarding one penalty for each team, one for a handball by Nemanja Matic and another when Eden Hazard had his legs taken out by Valon Behrami. Overall, Marriner was one of the best performing referees this weekend
-Mike Jones also could have called two penalty kicks in his match, Tottenham-Norwich. He correctly pointed to the spot early on when Harry Kane was tripped by keeper Declan Rudd, but also should've blown the whistle when Tottenham keeper Hugo Lloris knocked down Cameron Jerome.

-Arsenal fans as well as manager Arsene Wenger were incensed at Jonathan Moss and his crew after several calls went against the Gunners, believing there was an infraction in the buildup on the first three of Southampton's four goals, saying that the plays were respectively made possible by an offsides, a foul, and an incorrect corner kick decision. Wenger is correct, though it should be pointed out that Moss and his team correctly disallowed two of Southampton's goals for infractions.

Matchday 19 (December 28-30)
-Anthony Taylor and his crew were very busy at Vicarage Road for Watford-Tottenham, with Taylor becoming the first referee to show a red card during the festive period when he correctly sent off Nathan Ake for a high boot. However, the real moment of controversy came when Son Heung-Min's late winner for Tottenham appeared to be offsides. It was slight, but assistant Stuart Burt still should have seen the infraction.
-Kevin Friend appeared to make a key mistake in Sunderland-Liverpool when he failed to send off Jeremain Lens for a rough two-footed slide that took out Mamadou Sakho. Friend did show a yellow, but it looked like serious foul play and therefore a red card to me.
Posted by Unknown at 5:46 PM No comments:

Thanks for your support! 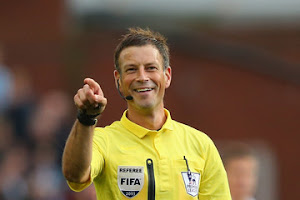